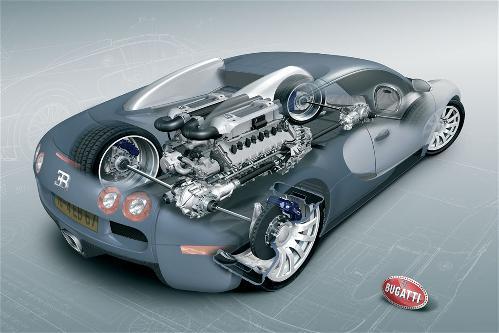 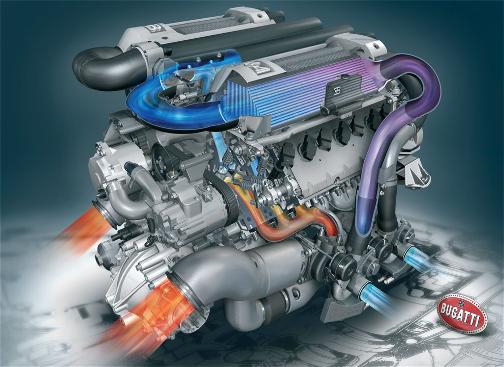 Bugatti Veyron 16.4: Superior in Every Sense
After four years of development, the Bugatti Veyron 16.4, as it was finaly called, was ready for series production. The most exclusive sports car of all time is following in the footsteps of the legendary Bugatti, those universally-coveted limousines and unbeatable racing cars of the 1920s and 1930s which today are among the most sought-after creations from the early days of automobile construction.

This brings to an end the era of design models and concept cars which since the late 1990s have signposted possible paths to the Bugattis of the future. Design and technological concept have finally become reality in the Veyron model’s final form which became available in the beginning of 2004 as a strictly limited edition of just 300 cars. Technologically futuristic and packed with creative engineering, the first Bugatti of the 21st century had finaly arrived.

Merging the Past and the Future

The Bugatti Veyron 16.4’s home is in Molsheim-Dorlisheim, the French town where, almost 100 years ago, Ettore Bugatti began to realize his lifelong dream of being a car manufacturer.
The new workshop is not just where the engine and vehicle are assembled and tested, it is also the place where customers collect their Bugattis and drive them out onto the streets for the first time.

The aim is to turn Molsheim into an all-round Bugatti center once again. While up to 70 new vehicles a year are built by hand in the new facility, neighboring specially-equipped workshops are the scene of expert restoration work on historic Bugatti vehicles. Both past and future have found a new home here.

The car’s safety systems have been designed to cope with its extraordinary performance, acceleration and speed. The single-piece carbon-fiber monocoque alone scores maximum points in crash tests, while airbags give the driver and passenger additional protection. The high-speed tires designed specially for the Bugatti Veyron 16.4 (for vmax. > 350 km/h), sizes 265-680 ZR500A (front) and 365-710 R540A (rear), incorporate a further innovative safety feature in the form of the PAX System fitted to the wheels and tires, ensuring safe handling even after sudden pressure loss. Another Bugatti Veyron 16.4 component with a safety element is the rear spoiler. As well as providing the necessary downforce during high-speed travel, it acts as a kind of ‘parachute brake’ during emergency braking. Once precisely-defined deceleration forces are registered the spoiler tilts and the additional air resistance this generates reduces the braking distance.

The Art of the Machine 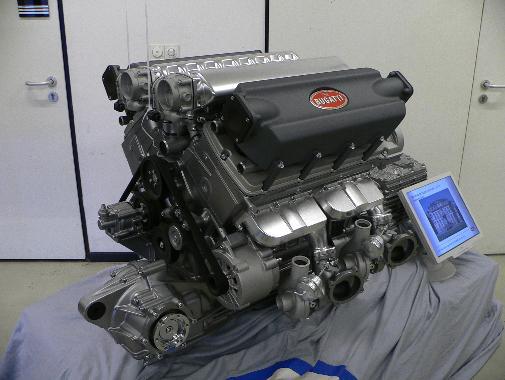 The W16 engine is a sixteen cylinder piston engine in a W configuration. All W16 engines consist of four banks of four cylinders (two juxtaposed V8 engine blocks), coupled to a single crankshaft.

The W16 alloy engine developed by Bugatti for the Veyron 16.4 has a special and absolutely unique place in the history of sports car construction. Its design employs the space-saving VR principle with two particularly slender eight-cylinder blocks arranged at a 90° angle to each other.

1001 horsepower equips the Bugatti Veyron 16.4 with a level of acceleration unheard of in the sports car segment, propelling it from 0 to 60 mph in just 3 seconds and past the 200 mph mark in a mere 14 seconds.

Thanks to its 923 lb-ft, the Bugatti Veyron 16.4’s enormous propulsive power is not exhausted until it reaches 252.3 mph (406 km/h): the maximum speed for which chassis and drive train have been designed. Any further performance escalation is limited by current design and construction.

Volkswagen Group currently produces W16s. Volkswagen's design is a stretched form of its W12 engine, which is itself based on technology from the VR6. The engine was introduced with the Bentley Hunaudieres concept car, a mid-engined supercar which was never intended for production (Bentley being a VW holding as of 1999).

The VR6 is a very short inline six designed to fit in the confined engine bay of a front wheel drive car. It is very short for an inline 6 because the cylinders are staggered, even cylinders moved forward, odd cylinders moved backward to reduce the length. Joining two such designs together into a W engine creates a design that is much shorter than a V with the same number of cylinders, but not too much wider. Volkswagen's W12 engines utilize two VR6-like sets of cylinders mated at 72 degrees, and the W8 consisted of two VR4s at the 72 degree angle. In the W16 each side is made up of eight cylinders, but the 'bank' angle is increased to 90 degrees. The W16 can be thought of as two banks of two sets of VR4s joined end to end.

Note that this design differs from the W18 engine that Volkswagen produced for its Bugatti concept cars of 1998 and 1999. The narrow angle of each set of cylinders allows just two camshafts to drive each pair of banks, so just four are needed in total. For this reason, the engine is sometimes described as a WR16. Bugatti has also added four turbochargers to the W16 engine, allowing the Bugatti Veyron 16.4 to create the 1001 bhp. The car tops its predecessor, the Koenigsegg CCR, as the world's fastest supercar.

Also unique is the power transmission via an innovative directshift gearbox. Without any interruption in the power flow, the sequential seven-speed gearbox transmits the engine’s power to the wheels via permanent four-wheel drive. Put simply, this means uninterrupted acceleration from a standing start to maximum speed: a feeling previously known only to jet pilots. 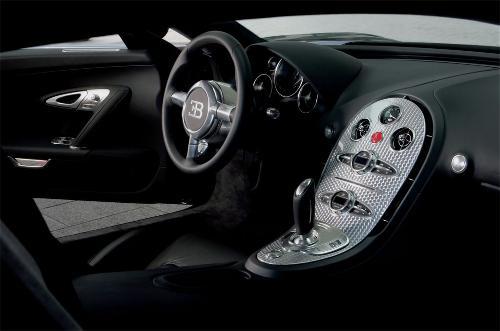 Both exclusive and highly functional, the interior of the Bugatti Veyron 16.4 will transport you to a world of your own. Superb leather, also two-tone if desired, quality metallic trim and beautifully designed and ergonomically laid-out controls characterize the Veyron cockpit. 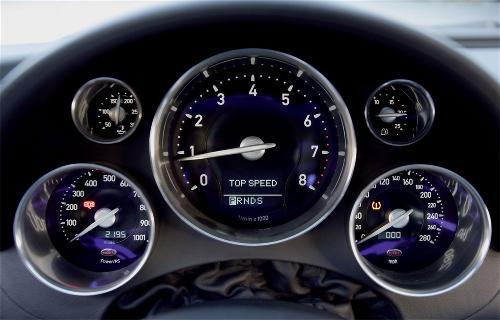 The Bugatti Veyron 16.4 instruments, with a large central rev counter surrounded by four smaller additional instruments also conjures up memories of the marque’s legendary motor sport past. The deliberate avoidance of superfluous instruments and modern extras are an unmistakable statement of the car’s uncompromising sportiness. 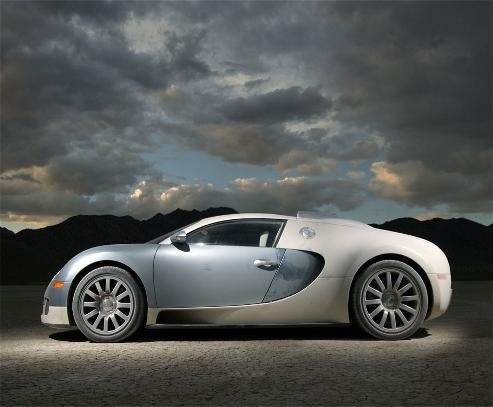 Unchanged on the series version of the Bugatti Veyron 16.4 is the classical two-tone paintwork. 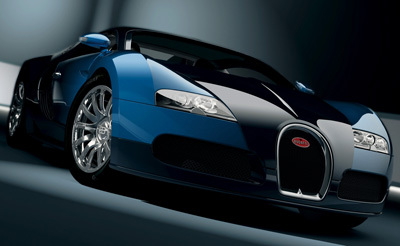 The designers have selected five separate color combinations for the car: 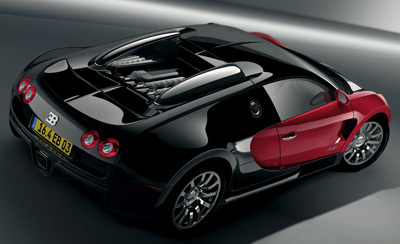 Each of the combinations features the hood, roof and rear in the darker of the two colors, with the sides and front wheel arches in the lighter color. 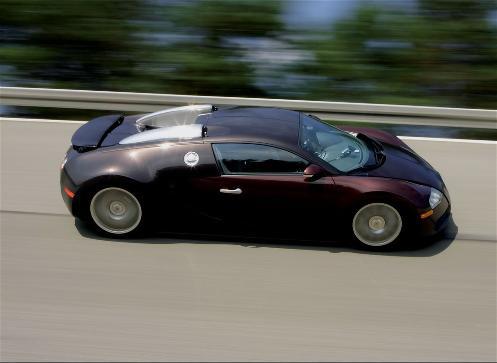